LEDs in the Length of Strip
Generally, LED strips have some appreciable amount of LEDs per foot (or meter, etc). The farther the LEDs are spaced; the strip lights produced are spot-like instead of a clean line of light when they are close enough to each other.  Our strips are made up of standards 120 LED, 90 LEDs, 60 LEDs or 30 LEDs per Meter.  This can also be adjusted and customized to client’s own desire.
Brightness of LED Strip Light
Over the past years, LED technology has significantly improved so much so that the small diodes can produce much and highly significant amount of brighter light. However, not all LED strip lights can give the brighter intensity you want. The brightness of lights is measured in lumens (not watts as is commonly believed).
Now, depending on how one is using the LED strip lights, one will have to require a certain level of lumens.
Note:
There is no set standard, so one manufacturer may state that there are 250 lumens per foot whereas another states that there are 250 lumens per meter. The first LED strip light would be much brighter than the second.
LED Strip Light Color
LED strip lights come in a wide range of colors as well as strips that can change colors. The most basic LED strip lights are called ‘non addressable' and will only emit one fixed color of light. They are generally easier to install. A second type of LED light is called  ‘non addressable RGB strips'. These LED strip lights can display a host range of lights; Red-Green-Blue. There is a high significant difference between the addressable LED strip lights and the non-addressable strips. The latter has a small controller between each LED that makes it possible to control each LED on an individual basis, while the former lack that.
Color Temperature 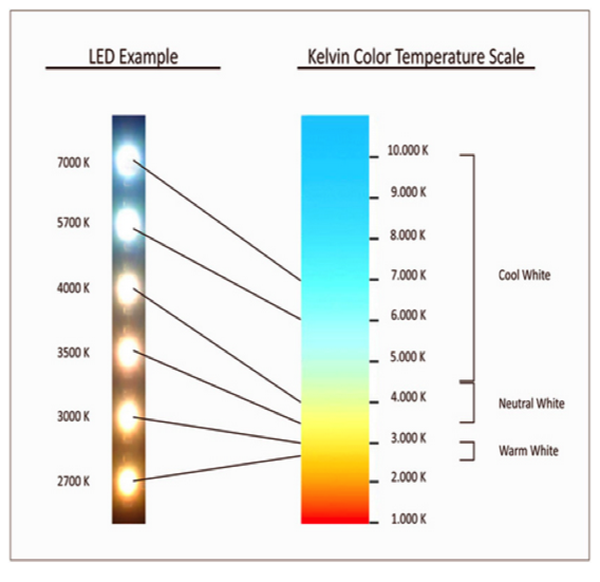 Notice these key specifications:
In the LED industry, do not be surprised to find some LED strip lights that have color adjustable temperatures, as it is possible. These adjustable temperature LED strips can be very useful if you want to use the light strips for various types of mood lighting.
Installation of the LED Strip Lights
Before you purchase any LED strip light, consider first how this product would be installed. If it is a flexible strip with adhesive tape at the back, then this may be as simple as sticking the lights where you want them to go and plugging them in. However, some of the strips such as the Programmable LEDs, LED rigid bars, under cabinet LEDs and other waterproof LED strips demand a much more complex installations; where strips must be cut and programmed.
As far as the installation of LED strips is concerned, always make sure you observe the following factors:
Wattage of LED Strip Lights
With power outages of LED strips, always make sure your power outlet can handle the energy demands of the LEDs. To do that, find out how much energy your power supply can handle. For instance, a typical power outlet can handle 15A before it shorts out.
At 120 volts, that comes out to 1800 watts. It is advised that you never surpass 80% of the total capacity. In this regards, you should not put more than 1440 watts.
Note that wattage is sometimes listed per reel, per unit of measurement, or per LED. If wattage is listed in units or per LED, then calculate how many feet or LEDs will be used in total of your project and multiply that by the wattage. This will let you know whether your circuit can handle the LEDs or not.
Another reason to pay attention to LED wattage is because of energy consumption. Even though LEDs typically don't use much electricity (compared to most other types of lights), the electricity usage can still add up and take a toll on your electric bill.
Remember: it should not be a very tough task when looking for LED strip lights to purchase so long as you know what you are looking for: power demands, colors and easy installation. However, there are many LED strip lights purposely designed for specialized use. An example is those programmable LEDs. They should be carefully selected to match your set design.